The fashion set flew to San Diego for Louis Vuitton’s sun-drenched Cruise 2023 collection, fresh off last week’s Chanel Monte Carlo extravaganza. The cruise collection was unveiled at the Salk Institute in California, where creative director Nicolas Ghesquière continued his tradition of presenting Louis Vuitton cruise exhibits at some of the world’s most renowned architectural sites. The most recent venue, designed by Louis Kahn, had a front row that included Lea Seydoux, Miranda Kerr, Gemma Chan, and Emma Roberts, among others.

Read on to discover the key takeaways from Cruise 2023.

It was hosted in San Diego!!

Ghesquière has made a habit of staging his cruise performances at architectural wonders like John Lautner’s Bob Hope House in Palm Springs, Oscar Niemeyer’s Niteroi Museum in Rio de Janeiro, I. M. Pei’s Miho Museum outside Kyoto, and now the Louis Kahn-designed Salk Institute in La Jolla. The monumentality of Kahn’s masterpiece is matched by its humanity, but Ghesquière was equally enthralled by the natural world as he was by the Brutalist concrete. It was difficult to disagree as the sun sank over the huge expanses of early 1960s buildings. The working biological studies campus was an excellent choice for a designer interested with time travel and breaking tradition.

“I had the honour of visiting the basement; it’s like a hideaway straight out of science fiction!” Ghesquière told his guests. “Beyond the very impressive site, this place holds enormous meaning for the future of humankind.”

It was all about the sun

Another masterwork from the Golden State (California). In this case,’it’s as if the sun had found its frame,’ explains Ghesquière. “It’s another image of California,” At dusk, the water transforms into liquid gold, making it a surfer’s paradise and an engineering marvel. “When I saw its strange harmony, everything clicked. I wanted the clothes to be like reflections, a point of contact between light and people.”

The fabrics were captivating and the silhouettes were exquisite.

The Cruise 2023 collection included ‘clothing for praising the sun as well as clothing for protecting yourself from it.’ Notice the sun-glinting molten metals that walked down the catwalk, the protective, futuristic-looking eyeglasses, the jacquard goddess-style robes, the hybrid shoes that merged desert boots, trainers, and mules, and the intricate, draped fabrics that gave off a nomadic vibe. “The contrast between technology and the earth,” explained Nicolas.

Nicholas, who is happy with Louis Vuitton’s substantial fabric advancement this season made clothing with warrior-like appearance that had a mix of strong structure and fluid draping. But against the dazzling environment, the high-shine metallic denim, sewn with oxidizing and changing color embroidery, looked especially spectacular.

When rendered in tough-girl metallics, the new-season arm candy, which included a supple take on the Petite Malle and a cushioned motorsport-look shoulder bag, looked especially seductive. On the runway, however, it was the personalized skateboards worn by models like Binx Walton that stood out.

Lauren Wasser was the runway star of the night.

Lauren Wasser, a double amputee wearing silver shorts suit unveiled her gold prosthetics, was the night’s runway sensation, not for her exceptional tailoring, but for her Toxic Shock Syndrome campaign, which had the audience talking. Follow @theimpossiblemuse on Instagram to see Wasser dancing to Grimes’ DJ set, which rounded out the night in La Jolla. 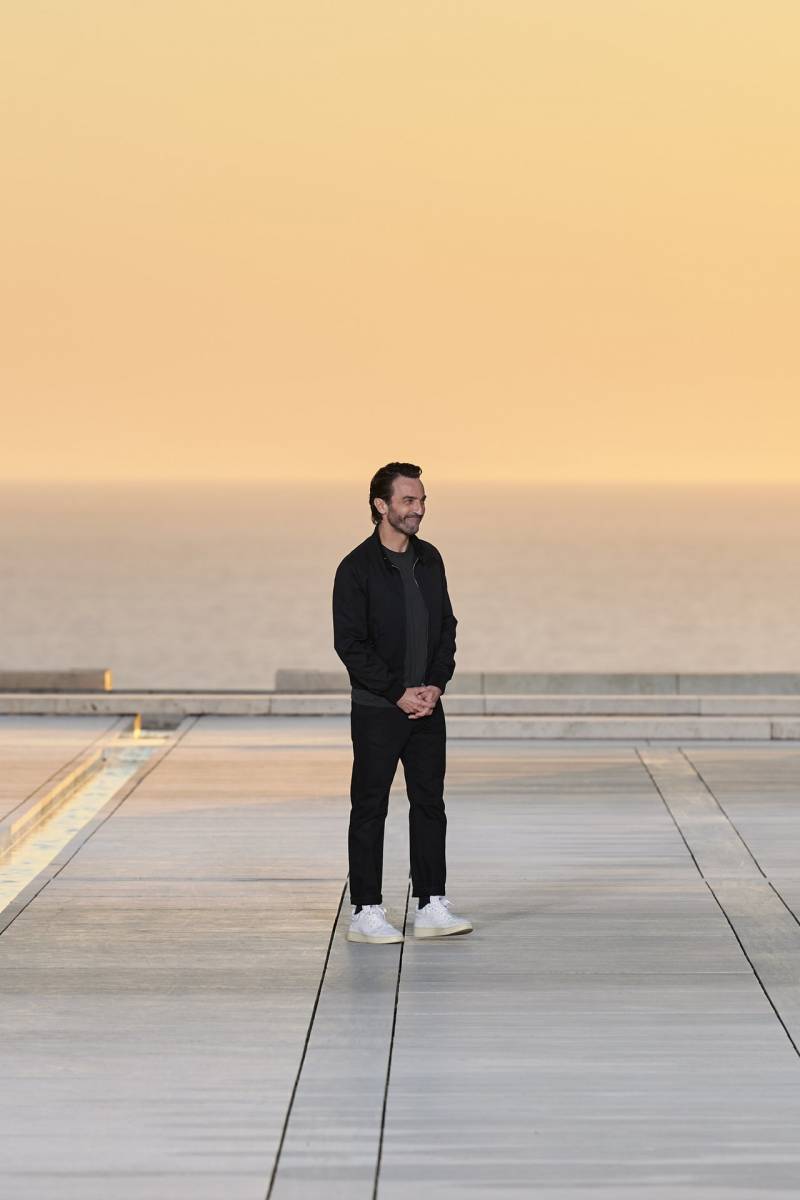