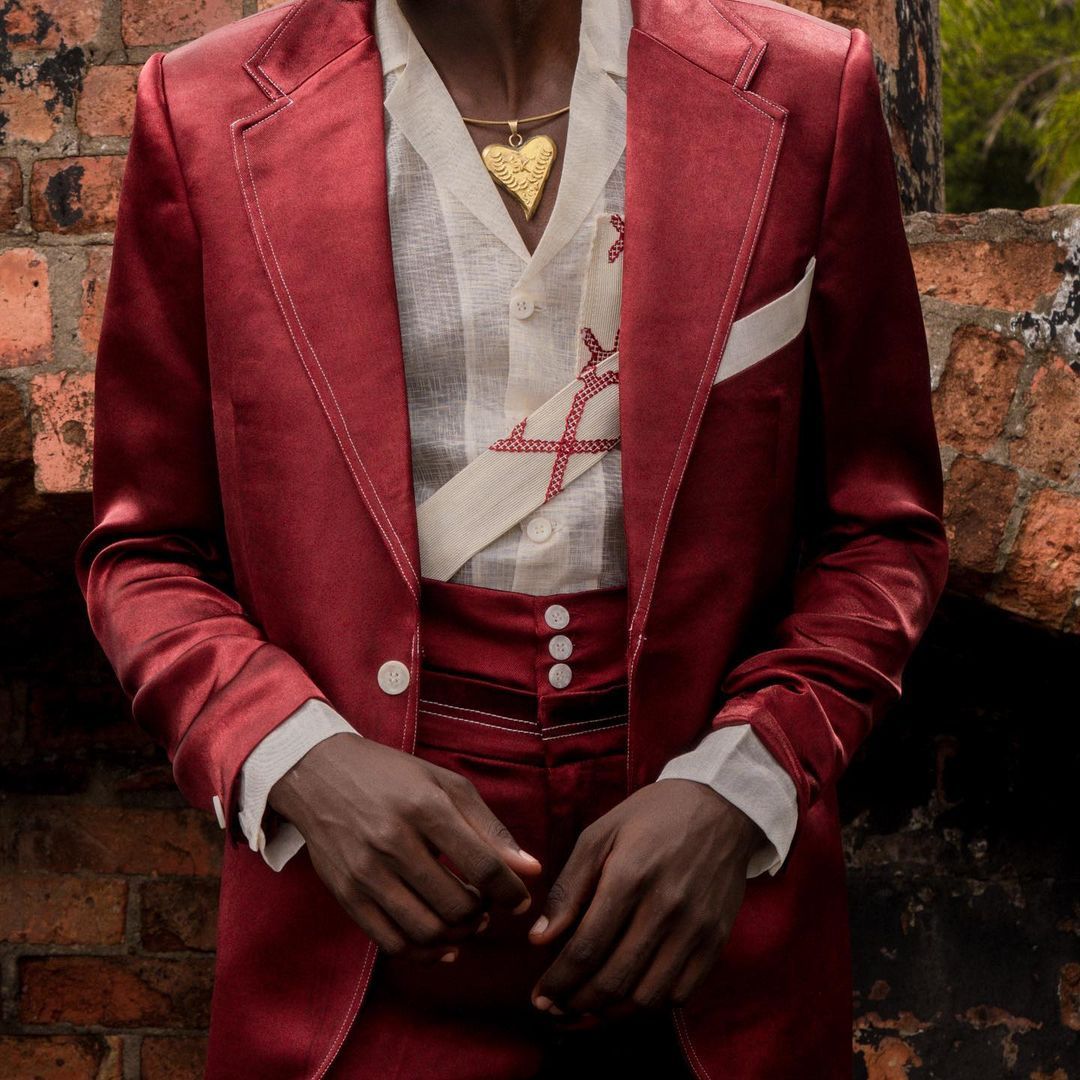 According to the brand, the collection embraces the spirit of unity and perseverance. The line-up consists of revamped silhouettes from the brands past seasons and collections – tribute to reawaken the true essence of Joy.

Anyone who knows Emmanuel Okoro, the creative director of Emmy Kasbit knows that his work is richly influenced by the rich cultural heritage of his motherland, Nigeria. His SS21 collection was no different. Using the Akwete fasbric – a traditionally woven fabric, the brand focused on men and womenswear with impressive delicacy and skill.

The collection contains a line up of suits and dresses but was makes it unique is the use Nsibidi symbols on each fabric.

Nsibidi is a system of symbols indigenous to what is now southeastern Nigeria that are apparently pictograms, though there have been suggestions that some are logograms or syllabograms. The system of symbols is estimated to have been around from 400 to 1400 CE, as the earlier forms of the symbols appeared on excavated pottery, ceramic stools and headrests from the Calabar region.

A double win for Emmy Kasbit, the “Unity Redefined” collection was unveiled at a private screening hosted by African Fashion Foundation at The Lotte, Accra on September 22, 2020 and also exhibited at the Milan Fashion Week. The brand was announced as one of two African brands selected as the winners of Italian Vogue’s Scouting For Africa initiative later on.

0
Toke Makinwa, stockist of all things fashion-forward, decided to dress up her  oversized shirt dress paired with a corset with a pair of...
Read more
Runway

0
Just in time for The Buzz, Toke Makinwa shared her latest boss looks with the world and it does not disappoint.
Read more

0
After celebrating a Golden Jubilee, super model Naomi Campbell has been named the first ever celebrity ambassador of the beauty brand Pat...
Read more
Hair

Selena Gomez Just Went Blonde and Maybe We All Should

0
Selena Gomez sent fans to a frenzy when after debuting her new platinum blonde hair color — a dramatic turn from her...
Read more
Hair

0
Dakore these days is known for her long extensions (gone are the days when the actress wore dread which we would love...
Read more

Coronavirus| The New Virus in Town

0
If you've paid attention to the news, then you've probably heard of Coronavirus. Between you and me, it feels scarier than zombie...
Read more
Wellness

Vaginal Health: What constitutes a healthy vagina and how to keep it healthy

0
An unhealthy vagina can affect a woman’s fertility, sexual libido and orgasm. It leads to serious reproductive issues and other health...
Read more
Wellness

0
This article explores amazing vagina facts that you should have known a long time ago The vagina is...
Read more

“The Art Of Hair” Crowned Royalty Captured By Brandon Hicks

0
Talking to Infringe Magazine, Hair and Makeuo artist Feza Nuza talks about her love for hair. In an instagram post she says...
Read more
Culture

Who is Ini Dima-Okojie – Complete Biography of the Nigerian Actress

0
Ini Dima-Okojie is Nigerian born actor, a native of Edo State, Nigeria. She grew up in Lagos. She is the last child...
Read more
Culture